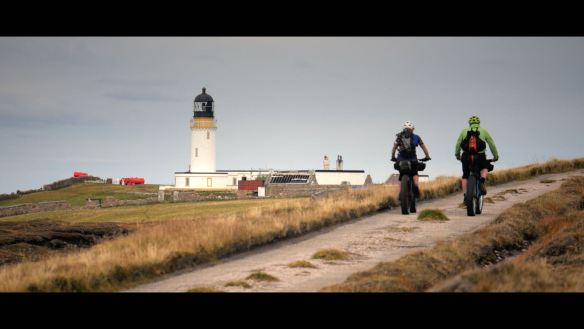 A movie has been made out of Lee Craigie’s trip to Cape Wrath 2015! Together with music from the album “Lighthouse Stories” and fragments from Jeanette Winterson’s novel Lighthousekeeping. I feel stunned! Click here for a teaser!

The film is broadcasted at Edinburgh Film Festival 6-7 feb 2016 where she also tells about the trip.

Excerpts from her blog:

“Perhaps I should have given up and accepted that it [Cape Wrath] just wasn’t meant to be but then this happened. I was at a road race in an out of the way north eastern coastal town shortly after yet another failed attempt to visit the Cape when a guy came up to me and told me there was a gig about to start in a nearby lighthouse. I ambled along after the race and became engulfed in a friendly fold of woollen jumpers and wellington boots while the wind and rain did their thing outside. On a small, makeshift stage there sat singing a Swedish angel. Sofie Livebrant had written her entire album “Lighthouse Stories” using prose taken from a book set at Cape Wrath. In the days that followed, I listened to Sofie’s music and read the book that inspired her album (“Lighthouse Keeping” by Jeannette Winterson). Both touched me deeply and a theme emerged that sent me reeling. It was that of attempting to balance two powerful aspects of my personality, the need for freedom and the need for belonging. I was heading back to Cape Wrath”

This entry was posted in Uncategorized. Bookmark the permalink.

This site uses Akismet to reduce spam. Learn how your comment data is processed.